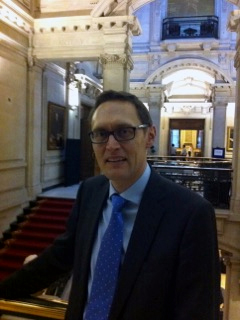 It was announced today that Jonathan Cain, currently in his final year of ordination training on the Yorkshire Ministry Course, will serve as full-time Assistant Curate at Bolton Priory after his ordination as deacon in Ripon Cathedral on 04 July 2015.

Jonathan is a civil engineer, and prior to responding to the call to ordained ministry he worked in the UK water industry. He started his professional career at Yorkshire Water, moving to Skipton based JN Bentley Ltd in 1994, where he served as Engineering Director. He resigned his post in 2013 to commence ordination training, but continues to work for the Company on an ad hoc consultancy basis. Civil engineering will always be in Jonathan’s blood and earlier this year he was delighted to join the Water 4 Life Committee (Part of the Diocesan-Mara link), which funds and advises on water supply projects in rural Tanzania.

Jonathan’s early years were spent in the London and the south-east; he went on to Nottingham University, graduating in civil engineering, and moved to Yorkshire to follow his future wife Rebecca. Jonathan also has a business degree from the Bradford School of Management.

For the last 18 years Jonathan and Rebecca have lived in Menston and they have four sons – Arthur (17), Nicholas (15), Bill (10) and Charlie (8) – who make sure that there is always something to do!