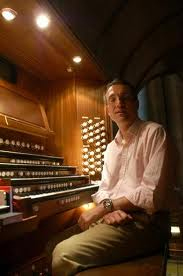 Born in Middlesex in 1968, Sean studied organ with Richard Seal at Salisbury Cathedral before entering the Royal Academy of Music in 1986 where he continued his studies with Christopher Bowers Broadbent (organ) and John Hall (composition). In 1991, he moved to the West Midlands taking the posts of Organists of St. John’s Wolverhampton (1991-1994) and Assistant Organist of St. James the Greater Leicester (1994-1995), before his appointment as organist of All Saints Leamington Spa in 1997 where he remained for 10 years.

Sean’s recital will include the following works: